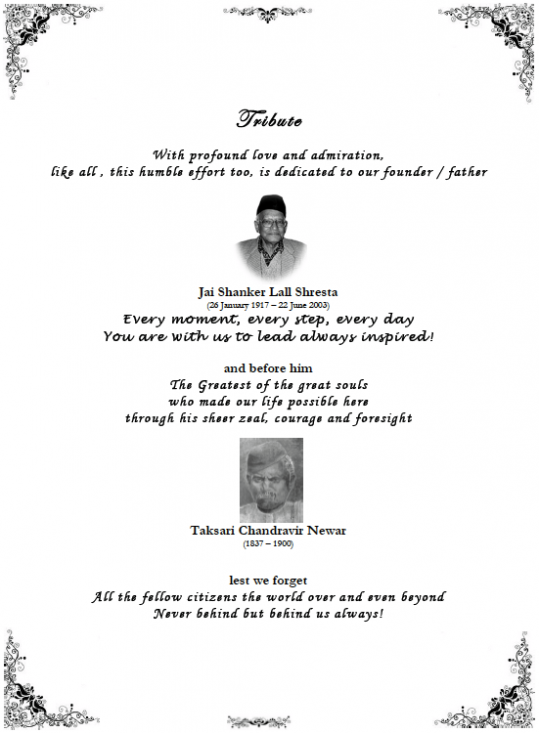 Buba, my father
A Tribute in Pitri Paksh


My Buba was not a political figure nor a government officer to reckon with but the Sikkim society of the period used usually to look to in respect though much water has flown the Reshi nearer home to mingle with the mighty Teesta now reduced to what you can see to believe! These days even the politicians have completely overshadowed the bureaucrat not only in this little Himalayan state but also in the mainland over some decades ago when Sikkim had not even been merged with India to be the 22nd State on May 16, 1975 – Time Change and so is the society we are in and the perception!

Without succumbing to the whims and fancies of the local upshots in then turmoiled Himalayan Kingdom, he said it better a day than to be on his knees. He was not with big fortune but yet yes, he had seen better days early in life in Benaras during the glorious days of the Nepali Kothi in the narrow lanes of Chaukhambha – Harishankerlal Ramshankerlal Nepali my grandfather and his brother started in 1887. It was my Buba's initiative in efforts to start a branch of this firm in 1951 in the main hub of the Indo-Tibet trade that Kalimpong used to boast of until the China takeover.

Our firm used to be located in the first floor of the Jethmull Kodamull building at 10th Mile, where presently the top distribution house of Balkishandas Shyamratan is located. Kansakars had just started his business of aluminum utensils in the ground floor. He is much adored today even by the Tibetan/Bhutia community as Syamukapu, by which name the book penned by his daughter was brought out in 2005. She has given a beautiful account of the life and times but I found amiss the mention of our business house located just above in the same premises.

A series of death in one's family is enough to ruin a man to make and take a hell out of one's life that people dread even today whenever someone dies. Known as Panchak in common parlance that the family members first ask their priest to consider and take care of. It means five and the cruel death, Yamraj has to take that much number of the family in a row. That was the fate my Buba had to face in early 1950s. Daughter Manorama, mother Bishnumaya, father Harishankerlal, wife Karuna Devi and son Deepak, not yet in his teens, younger to me by three years, I think – all lost one after the another. My sister whom I do not remember at all but someone told me when still young that I too had one by that name. Even my grandmother is too not clear but I know hazily my grandfather in his eighties, who used to have a little shop to earn of his own with some of the commodities for the main business house he started with at the ground floor corner that had warm sunny morning in winter days for him. He used to give away sweets as prasad, offerings made to the god in the home or temple, to the children asking him for more and more of it.

I could visit last this holy place in 2006-end when we were on a pilgrimage to Benaras-Gaya to pay respect and perform shraddha on Paush Amawasya. It is believed that once the shraddha performed there, one need not ever perform thereafter. Such is the significance but that does not stop us in remembering our departed forefathers and more on the specific days to offer them pind and tarpan. We had the rarest of the rare opportunities one could think of, while in Benaras, being next to the house where I was born and spent some of my childhood days since I remember starting my education at Rhenock missionary school with dhungay (pebbles) class that equals today's pre-primary class, where I learnt the alphabet writing by putting the maize/corn or pebbles on the floor over the letter written in chalk for the day by the teacher. I was in the St. Joseph's Convent Kalimpong for my primary classes to read and learn “Sing mother sing, sing, sing, sing....” which later my wife Ranjana made our children learn for lessons as kids going to Tashi Namgyal Academy, Gangtok.

Our neighbours of those days have the privilege still to continue staying in the same house even today though their children are located in Kathmandu and Delhi. Durgadai and Vijaydai with Bhaujus are happy to be there sun or rain though family obligations take them away quite occasionally. Now Vijaydai and Bhauju in Noida with their elder son Abhishek to see the younger son just employed  too settled, there make it difficult for Durgadai leaving Varanasi with Bhauju home alone for errands innumerable. He has to be in New Delhi quite often as the  advisory member of the consultative committee for Nepali language in Sahitya Akademi. His being in late seventies find him more dedicated. Age does not come his way nor does it deter him holding/organizing literary symposiums and seminars in different parts of the country and Nepal almost throughout the year. Besides he continues bringing out the Uday quarterly regularly that his father Kashi Bahadur Shrestha (Best Man to my father for his second marriage) started in 1937. It was this family's kind gesture that indebted us lifelong and comfortable in the city new to us arranging from pundit, puja and transport for the pilgrimage to Gaya and even to accompany us visiting Mirzapur, where my forefathers had started their business before coming to Benaras and the Vindhyanchal temple, where my Chhewar was performed as a child for hair being tonsured for the first time and a laddoo in my mouth to stop me crying!

We could celebrate the Jankwa, Sahasrachandradarshanam or Maharatharohan for sighting 1,000 full moons of his life when he reached 83 years and 4 months in April-May 2000. Thus not only me the son but the society could pay respect to this great man on his own right, when people from all walks of life – his students, their parents, once his colleagues, friends and everyone, even my relatives from far away Kathmandu made us grateful joining us all in this great occasion that lasted for days together for the social get-together to make it the red letter day in the annuls of / pages of the history. It was during this Jankwa celebrations that heralded a new chapter for the Newars in Sikkim under the new presidentship of Sikkim Newa Guthi Khagendra Pradhan, who established Newar Bhasha Ra Sanskriti Vidyalaya at Namthang in South Sikkim, reviving Dhimay Baja and Newar songs and dances introduced for the socio-religious functions in Sikkim once again else almost forgotten here. It was possible with the Rhenock Newar Guthi joining hands to make the celebrations all success.

My pen does not permit me mentioning my Buba all in words even if they exist simply because he was my father, Buba a simple man to the core of his heart all his life till he left for his heavenly abode in 2003. His M.A. (Commerce) from Calcutta University in 1939 could have taken him places not only in Sikkim but beyond with offers from Kathmandu, Biratnagar and Birgunj in Nepal. Yet he chose Rhenock as the place where he should dedicate whatever learnt all his life in the Benaras Hindu University and the Calcutta University, where Dr. Sarvapalli Radhakrishnan was among his teachers, till the end. It was here his in-laws, have contributed for generations to make Sikkim what is now today. Written in golden letters for time immemorial but unfortunately hidden covered with dust of time fortunately or unfortunately we are in.

My Buba, as I told you to start this homage, was not a political figure or a government officer to reckon with that the Sikkim society could be proud of. In stead, he was a simple well-educated man from the holy pious city of Benaras dedicating rest of his life in the hills named black, i. e., Rhenock of which I am proud of and as ever indebted as I could be to my mothers and to the Great family - from which both came - brought him here and us to follow his steps.

He was simply a mere teacher, but never ever on his knees whatever be the fate, in a village school that developed with him and for that its people loved to know and much remember him as the “Head Sir” only more than by his name Jai Shanker Lal Shresta even after years when he is no more amidst us. An award yet to a teacher then, he was honoured by people there in a simple function on the centenary year of the Rhenock Government Senior Secondary School for his contributions to take the school thus far. A memento in the shape of a wall clock presented to him on the occasion but without a word written on it, is a treasure to us that tell us of the time and the days gone by.

I offer these few lines in Tribute to my Buba and to all whom we owe during this Pitri Paksh in the Chandra Nursery Centenary (1910-2010) Year and rededicate myself to Sikkim that made my many a dreams come true, thick and thin, until my last day lead me inspired, dedicated to the society we belong!

Every man's work, whether it be literature, or music or pictures or architecture or anything else, is always a portrait of himself.
Samuel Butler